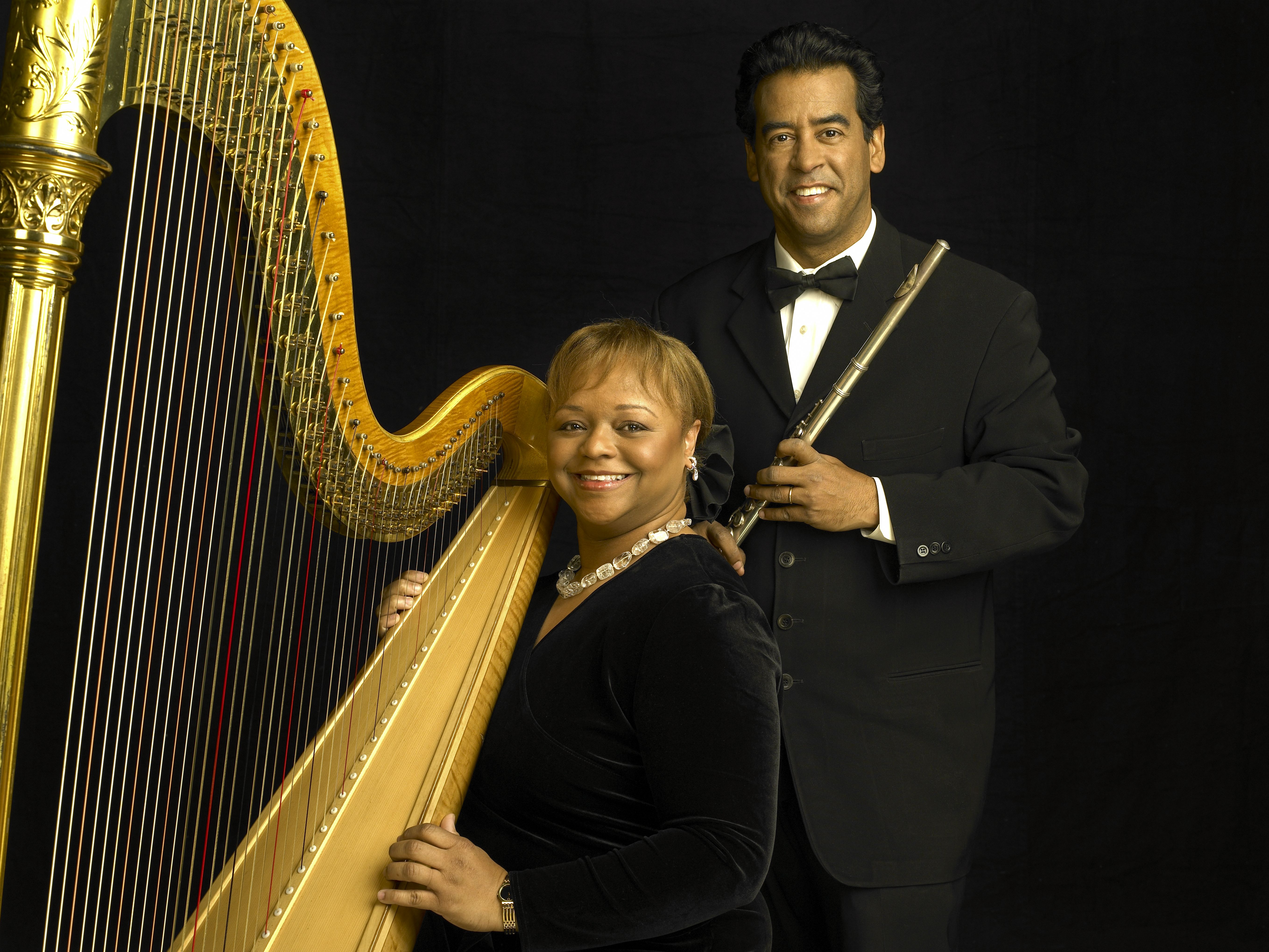 DANIEL CALVO (flute) was on the faculty of one of the nationʼs leading preparatory schools: St. Paulʼs School in Concord, N.H. for 13 years. He performs on saxophone, flute and congas with his own Top 40/general business group: NIGHT RHYTHM. Daniel received his degree from Berklee College of Music. Danielʼs extensive experience includes performing on Carnival Cruise lines, working in full time productions for shows such as Annieʼ and ʻBarnumʼ, leading high school clinics, recording for local entertainers, and backing up national stars including Joan Rivers, Tony award winner Linda Hopkins, and Kathryn Kiefer, host of Night Tracks and VH-1. He has also performed regularly at the Charles Playhouse bar in Boston with the “Lit Land Jazz Band” and has performed at the Capitol Center for the Arts in a premiere production of ʻ12 Moods for Jazzʼ; a tribute to Langston Hughes produced by world renowned Baritone Rawn Spearman.

LISA WASHINGTON CALVO (harp) has performed for countless professional freelance engagements in the New England area. Lisa began her harp studies in the Richmond (VA) Public Schools Harp Program. She received her bachelorʼs degree in Harp Performance at Oberlin College and a masterʼs degree from the New England Conservatory of Music. She studied during the summer at the Salzedo Harp Colony (Camden, Maine) and also at the Brevard Music Center (North Carolina). Her teachers have included Ann Williams, Jackie Pates,
Elizabeth Dechent, Alice Chalifoux and Ann Hobson Pilot. Lisa served as full time harpist at the Ritz Carlton Hotel in Boston for over five years. While there, she was featured on the WCVB news program “Chronicle” as well as on National Public Radio in segments devoted to the Ritz. She has played in many of the finer hotels in Boston and for functions at the World Trade Center, JFK Library, African Meeting House, Fogg Museum, and the Gardner Museum. Lisa has performed in many chamber music concerts including a program for the African Meeting House in Boston where she appeared with noted African American orchestral performers from around
the United States. The concert featured works by Composers William Grant Still, Scott Joplin, and T.J. Anderson. Lisa has performed for the National Republican GovernersConference and for the inauguration of Governor Shaheen of New Hampshire.

The Washington Calvo Duo was formed shortly after Daniel and Lisa became husband and wife. This group has performed at the opening party of the Boston Film Festival, and has appeared on the same bill as the Count Basie Orchestra. They have been guest lecturers on (AfricanAmericans in the Arts‚ at University of Connecticut and Brown University). The Duo has performed for numerous chamber music concerts in both Massachusetts and New Hampshire.
Recently, they performed for Governor Deval Patrick as part of his 2010 re- election campaign.